For a long time, I’d longed for going to a place shown in Japanese movie “Socrates in Love (世界の中心で、愛をさけぶ).”  This huge stone “Uluru” symbolizes a lot and romantically in that movie that makes me go on a pilgrimage to Uluru where is a sacred place for Australian aboriginals.

In 2015, for almost 3 weeks I went alone on a trip to Australia starting from a “workers’ city” Darwin where the expense is super high and the weather is extremely hot and humid but the city is quite cute with lots of legends relating to crocodiles.  Then the next stop is the center of Australia “Alice Springs”.   If we want to reach this so-called “the center of the world(Australia),” the easiest way is to fly directly to “Alice Springs”.   I went there with some young travelers (adventurers) in their twenties; so the trips with them is really a challenge.  We went outdoor camping with only a sleeping bag under the sky; yap without any roof just under the stars and the moon; and hiking, mountain-climbing…etc.  To be honest, those are pretty hard for me to go with them in my thirties age.

The various trips starting from Alice Springs are mostly connecting to Uluru –  waiting for the sunset of Uluru, getting up early for the sunrise of Uluru (cold to death), camping, hiking along the tracks of Uluru, riding a camel to see the sunrise from a distance of Uluru….etc.  I stayed for a least 5 days here and felt no bore at all.   This sacred huge stone “Uluru” has such charm to attract people all over the world and I definitely recommend it after my exploration. 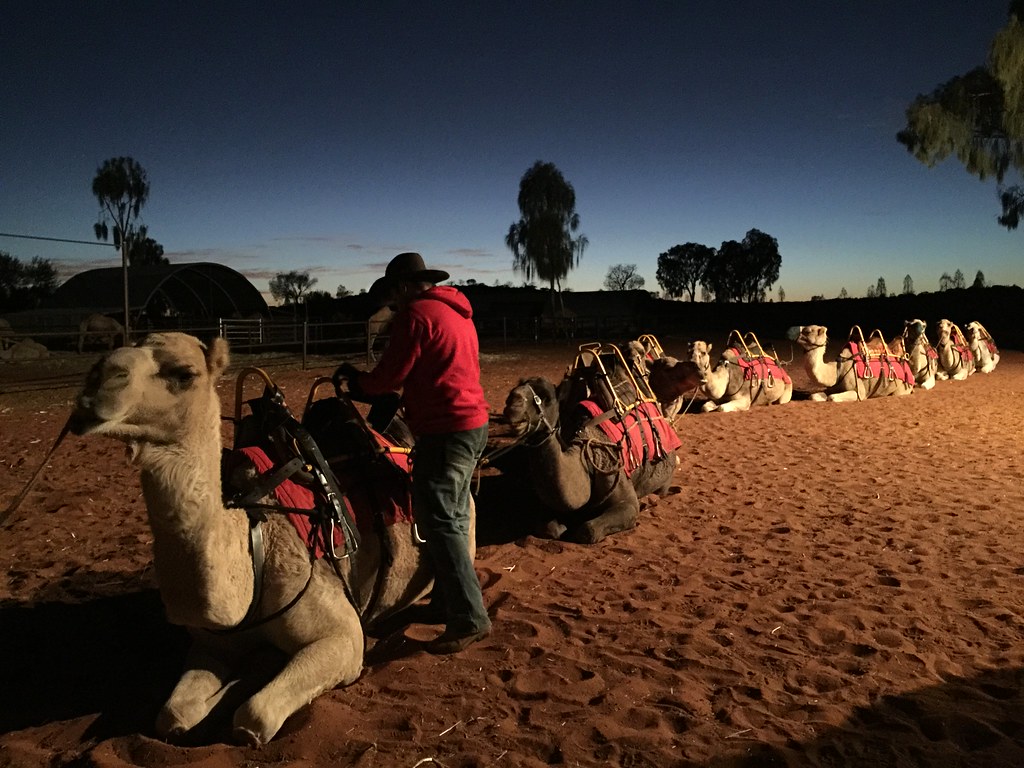 Morning camel riding with the sunrise of Uluru.  Nobody will think Australia has more than half amount of the bactrian camels neither do I until I came here for this activity.  According to wikipedia “The largest population of feral camels is in Australia. There are around 700,000 feral dromedary camels in central parts of Australia, descended from those introduced as a method of transport in the 19th and early 20th centuries.”  I thought the most population of the camels should be in the Middle East or North Africa or in China, but apparently I was wrong.  😛

Wish someday I can come back again with my family, or good friend of mine, or the one I wish to go together most – my husband.